In this blog, I want to share with you what our Lord and Savior Jesus Christ has blessed my family and I with and it is my sincere prayer for each of you that you will be able to enjoy our Abba Daddy's blessings over your own life. Shalom!

Prior to the setting up of this blog, I had another blogspot with the same name but under a separate URL. Please use this link to visit - http://andrew-lw-lee.blogspot.com

A blessed new year to all our Jewish friends. Shana Tova. In exactly 1 hours and 45 minutes, the Jewish calendar will change to their new year 5772. Rosh Hashanah is celebrated over two days and therefore will end at their 6:00 PM Jerusalem on Sept 30.
Rosh Hashanah is the only festival day when they will bring out all their trumpets at the time of their evening sacrifice at 3:00 PM and sound them all at once; what a glorious sound that will make. Also the Jewish custom is to sound the trumpet during wedding celebrations as a sign of rejoicing. The apostle Paul wrote in
1 Thessalonians 4:16
New King James Version (NKJV)
16 For the Lord Himself will descend from heaven with a shout, with the voice of an archangel, and with the trumpet of God. And the dead in Christ will rise first
- and so I will add that this Rosh Hashanah will be very special; will the sounding of the trumpets 3:00 PM Jerusalem tomorrow (Thursday) or on Friday signal the return of the Lord for us believers?
Of course, I am waiting with anticipation and would be more than ready when that happens. The question is, 'will it be this year?' or do we have to wait for yet another year? Certainly the signs are there - political and military developments in the middle east region; natural disasters; sicknesses and diseases; economic turmoil and even cosmic activities.
I don't know about you but I look forward to 08:00 PM Singapore time tomorrow... if you don't hear from me again, know for a certainty; I have gone with all the believers to be with our Lord and Savior Jesus Christ attending a wedding feast - the marriage of the Church with the Savior.
However, if it is not the right time as yet, trust me I will continue with this blog and there will be more posts.  Maranatha, Lord! Come Lord, we are waiting!
Posted by Andrew Lee at 06:13 No comments:

The Armor of God - The Belt Of Truth

The first piece of the armor that Paul referred to is the belt worn by the soldier. The belt is important as it held all his clothing together. The Roman soldier wears a one-piece tunic over his inner garment and this is generally a loose-fitting piece; hence he would need to wear a belt over the tunic so as not to expose his modesty as well as not tripping over it as he moved.
Something else that is interesting with the belt that the Roman soldier wore over his tunic - it is a leather belt wrapped around his waist with extension pieces dropping down to cover his private areas.
Ephesians 6:14 - Paul likened the belt as truth that holds everything tightly together and at the same time it is the truth that will protect the dignity of the believer. What is this truth? one may ask. Jesus died on the cross bearing all our sins and because He died, by faith we have also died with Him and hence all our sins have been forgiven. Since all our sins had been settled by the judicious death of our Savior, there is therefore no condemnation for us in Christ (Romans 8:1).
Had the truth been known to everyone who believes in Jesus as his/her personal Lord and Savior, there would not be so much misery and guilt feeling by Christians who are not conscious of the efficacy and full benefits of the Savior's death and resurrection.
Hence, by associating truth with the belt that upholds the modesty of the wearer, Paul is reminding us that we need not have any guilt feelings as all our sins have been forgiven and no condemnation hangs over us even in moments when we fail (especially when we fall). All we need to do in such moments is to pick ourselves up, thank the Savior for His grace (unmerited favor) and move on.
Posted by Andrew Lee at 05:21 No comments:

The Armor of God

The apostle Paul was inspired by the Roman guards who watched over him while he was in prison and this led him to write for us the secret of winning the daily 'battles' we have.
In Ephesians 6: 10-18, he described what each piece of the armor of the mighty Roman Empire would function for the protection as well as the advance of the soldier. 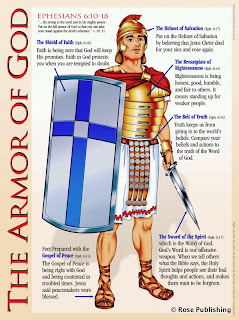 10 Finally, be strong in the Lord and in his mighty power.
11 Put on the full armor of God so that you can take your stand against the devil's schemes.
12 For our struggle is not against flesh and blood, but against the rulers, against the authorities, against the powers of this dark world and against the spiritual forces of evil in the heavenly realms.
13 Therefore put on the full armor of God, so that when the day of evil comes, you may be able to stand your ground, and after you have done everything, to stand.
14 Stand firm then, with the belt of truth buckled around your waist, with the breastplate of righteousness in place,
15 and with your feet fitted with the readiness that comes from the gospel of peace.
16 In addition to all this, take up the shield of faith, with which you can extinguish all the flaming arrows of the evil one.
17 Take the helmet of salvation and the sword of the Spirit, which is the word of God.
18 And pray in the Spirit on all occasions with all kinds of prayers and requests. With this in mind, be alert and always keep on praying for all the saints.


And so today is a rather sobering day for many as we remember the tragic loss of precious lives. Some people would say that these were 'acts of God' (as in the insurance industry) but really, is God really responsible for all these tragedies?

To answer that question, I suggest we take a look at the life and work of Jesus when He was on this planet. Jesus said that He and the Father are one and therefore the best reflection we can ever have of the heart of God is to look at His Son whom He sent to us so as to die and save us from our eternal destruction. In the four gospel accounts of Jesus' work, we read of Him performing many miracles of healing the sick and even resurrecting precious lives from the dead. And so, if we say that God was behind all the calamities, then there is a major disconnect - how can a disaster-causing God be a loving and healing Jesus at the same time? I know Jesus is NOT a schizophrenic - sending death at one instance and then healing at another. NO, Jesus is the personification of love Himself and He will do no such thing as sending people to their death.

I submit to you that the real person who is causing all these deaths is the devil himself. He is feeling lonely and he wants to have as many people dead so that they cannot attain eternal life but will join him in the eternal lake of fire. And so, will there be any more horror events in the future? yes, there will be but as beloved children of our Lord and Savior Jesus Christ, we can be protected when we turn to Him for His loving arms to shelter us from evil.
Posted by Andrew Lee at 05:04 No comments:

The apostle Paul reminded his readers, "Consequently, faith comes from hearing the message, and the message is heard through the word about Christ." (Romans 10:17).

John 1:1 tells me that Jesus Christ is the Word of God Himself and so when we hear Him as He speaks to us about Himself and the Father's love for us, our love for Him increases and so goes our faith.
Had the word of the Father's love for us been known on a more widespread manner, there will be less misery, less violence around us; there will be more love and tolerance for one another and the world will definitely be a better place.
The writer of the Book of Hebrews defined faith in chapter 11 verse 1 as  "the confidence in what we hope for and assurance about what we do not see." It is the hope we place on something that we know exists but which we cannot see at that particular point in time and so, as Christians, we place our faith in our beloved relationship with Jesus as our Daddy God and because He is our Daddy, we have nothing to fear but everything to gain.
So, put your faith in the Lord and keep hearing His word and soon you will be able to overcome the challenges you encounter in life.
Posted by Andrew Lee at 22:50 No comments: