In this blog, I want to share with you what our Lord and Savior Jesus Christ has blessed my family and I with and it is my sincere prayer for each of you that you will be able to enjoy our Abba Daddy's blessings over your own life. Shalom!

Prior to the setting up of this blog, I had another blogspot with the same name but under a separate URL. Please use this link to visit - http://andrew-lw-lee.blogspot.com

What Did Nasa Really Find On Planet Mars?

An article appeared today on the news wire "Daily Currant" that Nasa discovered two large slabs of stone with words inscribed on them. The article also mentioned that everyone at NASA Mission Control were surprised and could not help but believe what they saw that God left messages on Planet Mars stating that He is God.

Now, don't get me wrong that what NASA found is a confirmed hoax. On the contrary I will be happy to believe too what they discovered if NASA can show the proof of their discovery. Why would God leave a message on Mars when mankind does not even want to believe in what He did through Jesus Christ His Son at the Cross. I am not saying that NASA was lying or that it is impossible for God to leave messages on Mars for mankind. No, it is perfectly possible but the discovery sounded too unbelievable for me and NASA had better come forward to prove or disprove what the news stated.

On another note, events on Earth are now heading to a point of escalated celestial occurrences that the return of Jesus Christ, our Lord and Savior is very imminent. Several governments which had been denying the existence of UFOs in the past have not come forward to confirm that UFOs are as real as airplanes are a reality. Also the incidences of UFO sightings have been intensified - it used to be around 1000 sightings in a month around the globe but lately, the numbers have been stacking up.

So, you be the judge here. The End is indeed drawing nigh and shortly my fellow Christians and I will be taken up into heaven in the twinkling of an atomic second to be with our Lord and Savior Jesus Christ and if you are left behind and happen to read this post, please start believing that what is stated in the Bible is indeed true and that Jesus Christ is the Son of God and that He died for your sins and that through faith in what He did, you can receive what He had come to give you - salvation for your soul and a place in eternity with Him.

If you want to receive Jesus as your personal Lord and Savior, please pray the prayer at the bottom of this blog and immediately you will enjoy fellowship with Jesus as His beloved child. Faith is simply but the price paid is inexpensive because it cost God His precious Beloved Son.
Posted by Andrew Lee at 00:13 No comments: Links to this post

The way events are panning out, it will be interesting to note what we can expect over the next two years. And we have the fingerprints of God in the skies to give us a forewarning of the events ahead. It is very rare that we have four blood moons happening in close succession and NASA had coined the name "tetrad" for this special phenomenon.
Over the past six hundred or so years since NASA kept calculations, there had only been 3 previous occurrences of tetrads 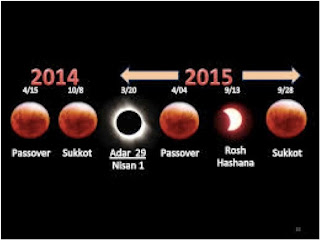 and they (NASA) had projected that a series of tetrads will take place over the next two years (2014 - 2015) and there will not be any more for five hundred years after that.

So, what does all these mean?  I will leave you to watch this video by Dr John Hagee as he explains from the Bible what had been prophesied millennia ago. I need to caution you that this video is the culmination of three sermons preached over three weeks and it lasts for nearly two hours; so sit tight and put on your spiritual seat-belts...
http://www.youtube.com/watch?v=0P8VLZADfKU
Posted by Andrew Lee at 15:21 No comments: Links to this post